Jersey lose by 14 runs to Italy in ICC Twenty20 semis

Jersey lose by 14 runs to Italy in ICC Twenty20 semis 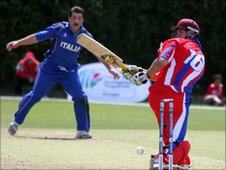 Jersey's hopes of playing in the ICC Twenty20 European Division 1 final were dashed as they lost in the semis to Italy by 14 runs at Farmers Field.

Despite a positive opening three overs Jersey had begun to fall behind the required run rate by midway.

Peter Gough top scored for the island with 31 but, with 19 required off the last over, Jersey fell well short.

Italy now play Denmark, who comfortably beat Guernsey by 58 runs in the other semi, in the final.