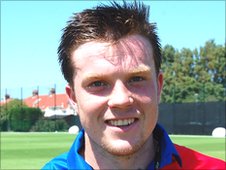 Opener Ed Farley's 57 not out helped Jersey beat France in their final group match to earn a European Division One semi-final with Italy.

France were restricted to 98-7 from their 20 overs, Anthony Kay and spinner Ben Stevens both taking two wickets.

Jersey were never in trouble in the run-chase, wicketkeeper Farley hitting five fours and a six in his unbeaten half century

Jersey's eight-wicket win sets up the clash with Italy at the Farmers Field.

While Jersey meet the Group A winners, Guernsey will play Denmark.

The two finalists will gain entrance into next year's global qualifier for the 2012 Twenty20 World Cup.