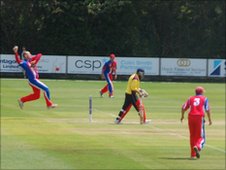 Jersey's European Division One semi-final hopes are hanging in the balance after a win and a loss on Thursday.

The islanders easily beat Belgium by eight wickets, reaching their target of 86 in just 11.2 overs as opener Ed Farley top scored with 36.

But they were then beaten by 58 runs by new group leaders Denmark, who had set a target of 169.

A win for the islanders against France on Friday would guarantee a spot in the final four of the Twenty20 tournament.

However, a defeat could see them knocked out of the event they are co-hosting with Channel Island neighbours Guernsey.

Both Jersey and Denmark have six points, with France, Germany and Belgium all on four.

Jersey coach Craig Hogan told BBC Radio Jersey: "This morning [against Belgium] we played very good cricket, but they came out this afternoon and we were outplayed.

"Denmark bowled better than us. I think our fielding was excellent, as it has been all week, but they outplayed us with the ball.

"Our batting plans just didn't come off this afternoon. We'll need a big win against France now to get through."

The two tournament finalists will go on to compete in the ICC World Twenty20 Global Qualifier in Dubai in March 2012 to fight for a place in the world finals.