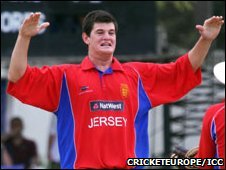 Jersey made a convincing start to their ICC European Division One Twenty20 campaign with back-to-back victories against Germany and Israel on Tuesday.

The Channel Islands side secured an six-wicket win over Germany before beating their Israeli opponents by eight wickets in their afternoon match.

Israel were bowled out for 87 with Tony Carlyon taking 4-9 before Jersey reached their target in the 12th over.

Germany made 99-7 but were beaten with three overs to spare.

Anthony Kay took 3-13 before Ed Farley top scored for Jersey, who are hosting the competition along with Guernsey, with 20.