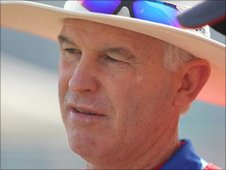 Craig Hogan has high expectations of his Jersey squad

Jersey head coach Craig Hogan believes they are good enough to reach the final of the upcoming European Division One Twenty20 Championships.

Hogan's men are on home turf for the competition and will face France, Belgium, Denmark, Israel and Germany in Group B.

Hogan told BBC Radio Jersey: "We know we can get through to this final.

"We're one of the favourites and we should be, we haven't been beaten here for a long time."

The two tournament finalists will go through to the ICC World Twenty20 Global Qualifier in Dubai in March 2012 to fight for a place in the World Cup.

Jersey are the reigning Division One champions in the longer form of the one-day game after winning the competition a year ago.

Hogan said: "We should be confident enough to go into these games thinking we can win because we are a good cricket side.

"We'll need things to go our way and when we won the European championship last year I don't think we dropped a catch for the week.

"We're going to need that sort of fielding again."

Experienced Jersey all-rounder Tony Carlyon, who had retired from playing for the island, has returned to the squad.

He said: "I'm really excited. I've played in quite a lot of tournaments - it's always special playing at home in front of your own crowd.

"I think this one's probably going to be the biggest one and hopefully we're going to be successful."

Guernsey will host Group A and will play games against Norway, Italy, Austria, Croatia and Gibraltar.

The tournament runs from Tuesday 19 July to Sunday 24 July.