Netherlands A beat Jersey by 27 runs in T20 final

Netherlands A beat Jersey by 27 runs in T20 final 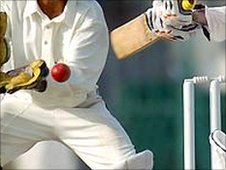 Jersey's cricketers suffered a 27-run defeat to Netherlands A in the final of the Continental Twenty20 Championship in Schiedam, near Rotterdam.

The Dutch won the toss and batting first made 144-7, before restricting the islanders to 117-8 in reply.

Ed Farley top scored for Jersey with 26 and shared an opening stand of 49 with Dean Morrison.

But VAB Tewarie's figures of 3-15 and tight bowling from man of the match TMB van Schelven gave the hosts the win.

Earlier on Saturday, when the sides met in the group stage, Netherlands A had won by 90 runs to top the table and leave Jersey in second spot.

The island side had comfortably beaten France and Belgium in the opening matches on Friday and will meet those countries again later in the month.

The three teams are drawn together in Group B of the ICC European Division One Twenty20 Championships in the Channel Islands.

The two sides that make the final of that tournament will go through to the ICC World Twenty20 global qualifier in Dubai in March 2012.

Jersey are the reigning Division One champions in the longer form of the one-day game after winning the competition on home turf a year ago.