Harry Tector bowling as Ireland Wolves trained for the first time in Bangladesh ©Atif Azam/CricketEurope
More fixtures for Wolves More fixtures for Wolves ( ) ZZZZ12:27 amZZZZ
Ahead of their eight-match tour of Bangladesh, more fixtures are in the pipeline for Ireland Wolves at home this summer.
Stirling favourite for International Award Stirling favourite for International Award ( ) ZZZZ12:48 amZZZZ
Paul Stirling looks favourite for the Ireland International Player of the Year award at Friday's event.
Wolves chomping at the bit Wolves chomping at the bit ( ) ZZZZ10:52 amZZZZ
Ireland Wolves emerged from quarantine to start their preparations for the challenge of Bangladesh A which gets under way on Friday in Chattogram.
Ireland Player of the Decade Awards Ireland Player of the Decade Awards ( ) ZZZZ4:11 amZZZZ
Ireland will choose their Player of the Decade at their awards ceremony next Friday, with shortlists of five being drawn up for both the men and women.
Stirling set to make history in Pakistan Stirling set to make history in Pakistan ( ) ZZZZ8:32 amZZZZ
Paul Stirling this weekend becomes the first Irish cricketer to play an elite-level game in Pakistan for almost 100 years.
Harry's Game Harry's Game ( ) ZZZZ8:22 amZZZZ
Harry Tector is captain of the 16-man squad which includes 10 senior internationals, four more hoping to break in and two who will qualify by residency early next year.

Afghanistan v Ireland, 1st ODIPics as Ireland lost the opening game of the series by 16 runs

NEW! Under 19 World Cup Records – the seventh part of CricketEurope's 12-part definitive resource for everything to do with Irish international cricket is now available.

Under 19 Records
Ireland records in the ICC Under 19 World Cup.

Men's International Players
Details of every player who has represented Ireland at senior men's level, including biographies, photos, video clips and audio interviews.

Men's International Venues
All the grounds in Ireland which have hosted men's international matches - with photos, articles, video, maps, plus all the scorecards and ground records.

2008 Under 19 World Cup
Ireland finished 13th in Kuala Lumpur, overcoming a poor start to the tournament to finish strongly.

2006 Under 19 World Cup
Ireland finished in 13th place, but they lost thrillers against both England and New Zealand in the heat and humidity of Colombo.

2004 Under 19 World Cup
Ireland and Scotland both lost in the semi-finals of the Plate competition in Bangladesh.
The Magazine
More

One brings two
Brian Dalton on some of the things that are said in cricket; why and when they are used and what they actually mean.

Remembering Kenya 1994
In 1994 Paddy O'Hara umpired the final of the ICC Trophy in Nairobi.

Irish Umpires: Alan Tuffery
For nearly 40 years Alan has made a great impression both on and off the field in a variety of roles.

Irish Umpires: Kenny Magee
One of the most unassuming and likeable people on the circuit, Kenny has been around the umpiring ranks for more than 15 years now.

Almost Famous
I decided after a match involving actor Gary Cooke, and a discussion over a few beers, that I must write down my (almost) famous XIs.

Irish Umpires: Trevor Henry
Trevor came to the fore in the 1990s and proved to be possibly the best umpire NIACUS and Ireland ever produced.
Irish International Players 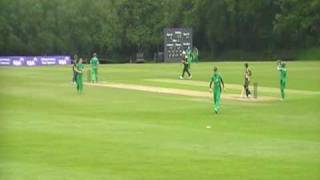 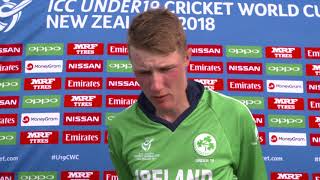 Ireland Under 19 v Afghanistan 2018
Highlights of Ireland's 4 run win in the Under 19 World Cup match in Whangarei, New Zealand. 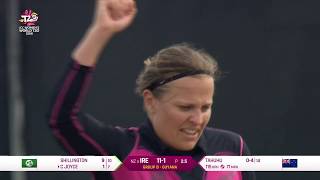 NW Warriors v Leinster Lightning, Sept 22 at BreadyPhotos from Bready as Leinster Lightning beat NW Warriors to clinch the cup
Latest News & Features
Articles Photos Audio
Club players nominated for Irish awards Club players nominated for Irish awards ( ) ZZZZ7:24 amZZZZ
Cricket Ireland have named the shortlisted players for both the men's and women's Club Player of the Year.
Clubs shortlisted in Irish awards Clubs shortlisted in Irish awards ( ) ZZZZ8:04 amZZZZ
Limerick, Newbuildings, North Down and YMCA have been shortlisted for the Club of the Year in the Cricket Ireland awards.
Dream weekend for Richardson in NZ Dream weekend for Richardson in NZ ( ) ZZZZ4:38 amZZZZ
It's been quite a weekend for Eimear Richardson, taking eight wickets and scoring 127 runs for her Northern Districts side in the New Zealand domestic 50-over competition.
Ireland to have two new awards Ireland to have two new awards ( ) ZZZZ7:07 amZZZZ
THERE will be two new awards at this years Cricket Ireland ceremony, which because of the pandemic will be held virtually next Friday evening.
Q and A with Kevin O'Brien Q and A with Kevin O'Brien ( ) ZZZZ6:36 amZZZZ
On the 10th anniversary of his world record innings against England, Kevin O'Brien is doing a free Q & A session on Zoom.
Pedal 4 Patto Pedal 4 Patto ( ) ZZZZ1:54 amZZZZ
Former Irish international Kyle McCallan is getting on his bike to help former teammate Andy Patterson.

Rob Arthur comes off the field during the 2008 NCU Cup final. ©CricketEurope
Bready favourites for Spirit of Cricket Award Bready favourites for Spirit of Cricket Award ( ) ZZZZ1:06 amZZZZ
Bready's Cricketing Cooks efforts are set to be rewarded with a 'Spirit of Cricket' prize at the Cricket Ireland Awards ceremony on Friday night.
Cricket in Garristown, 1881-1957 Cricket in Garristown, 1881-1957 ( ) ZZZZ1:33 amZZZZ
Jim Bennett continues his delve into the cricketing archives with a look at cricket in Garristown from 1881 to 1957.
Jim Finlay Jim Finlay ( ) ZZZZ7:06 amZZZZ
It was an umpire though that he found his true calling, an appointments secretary dream, always willing and available to do any match at any level. A case of having bails will travel for Jim.
Donating blood for the cause Donating blood for the cause ( ) ZZZZ6:38 amZZZZ
Back in 20008, the NCU Senior Challenge Cup final was a tough battle, with CSNI wicket-keeper Rob Arthur giving his all in a tense, low scoring affair.
Cricket in Skerries Cricket in Skerries ( ) ZZZZ7:42 amZZZZ
Jim Bennett examines the history of cricket in the Skerries area between 1883 and 1969.
T20 start likely for NW sides T20 start likely for NW sides ( ) ZZZZ7:05 amZZZZ
It seems likely that the NW will be starting their season with a T20 competition.
The Black Hills 1898 to 1969 The Black Hills 1898 to 1969 ( ) ZZZZ2:51 amZZZZ
Jim Bennett takes a look at the history of the Black Hills CC.
Death of Andrew Steven Death of Andrew Steven ( ) ZZZZ8:00 amZZZZ
One of the most recognizable faces of NCU cricket, Andrew Steven died recently.
Johnston gets ECB Level Four Coaching Award Johnston gets ECB Level Four Coaching Award ( ) ZZZZ1:50 amZZZZ
Northern Knights Head Coach Simon Johnston has been awarded his Level Four Coaching Certificate by the ECB.

European Play-Off, CIYMS v YMCAIn match pics as CIYMS beat YMCA by 15 runs and it they who will represent Ireland at the European League in La Manga